By climate deniers, I mean not only the people who deny the scientific evidence on climate change, but also those who accept the facts yet refuse their meaning. And it seems to me that this second kind of deniers lock the left into a political conformism with far reaching consequences.

The story so far

You may have heard of the destructive floods in Bangladesh, exceptionally strong typhoons in the Philippines, unprecedented droughts in Australia, pervasive wildfires in Russia, worldwide massive biodiversity losses, and hurricanes in North America.* You also may have heard of scientists commenting that the strength and frequency of such devastating events will multiply as global temperatures rise. 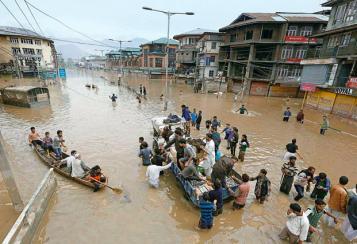 The news is that these observed impacts are due to a 0.85°C increase in temperature compared to pre-industrial levels, and – embrace yourselves – we are on a path to 3.6°C by the end of this century. In short, material conditions for human survival are worsening and will get even worse in the business as usual scenario.

But this was not the bad news.

The bad news is that there are tipping points in the Earth systems that will accelerate warming and push us down the cliff. These ‘positive feedback mechanisms’ add an extra parameter to any struggle: a point of no return, a moment after which social equity turns materially impossible.

The worse news is that this tipping point lies somewhere around 2°C warming. Unless we make urgent, substantial and sustained reductions in greenhouse gas emissions, we will face what many climate scientists call “the end of the world as we know it.” This means a world in which natural ecosystems cannot support the basic needs of civilization such as freshwater, agriculture and infrastructure services.

The maths is clear: We must leave at least 80% of all fossil fuel reserves under ground and we must reduce global emissions by at least %60 per cent in only 35 years.

These are the physical constraints of our struggle.

As Naomi Klein put it, “What climate does is provide the parameters for these [social justice] movements to work together. The parameters are that we’re on a deadline and, as a writer, I really appreciate deadlines. Things don’t get done without deadlines.”

Now the worst news is that the huge majority of the left is used to not working with deadlines.

Think about it: When we shout “The struggles continues.”, the underlying assumption is that the struggle can continue ad infinitum. When a political leader says “We will bring back health care and education for all.”, s/he doesn’t really tell us when. The narrative is that we will win one day in an unspecified future, and then that would legitimize all our previous resistance as a prelude to victory.

This is indeed really comforting. It is the business as usual for social movements. Business continues as it had for centuries, and social movements continue to resist as they do. Sometimes we win a bit, and sometimes they win a bit. It is a dynamic balance in which everyone has a function for the sustenance of the system.

But here’s the deal: You may have mixed feelings about your “country with future” or “future with dignity” or whatever you call it. You may not agree whether to negotiate, re-negotiate, restructure, re-restructure or cancel the debt. What climate science tells you is that you will have to do all those things you would like to do while reducing emissions by two thirds, and do all of that during your own political lifetime.

The good news is that international climate justice movement is building up. After the Peoples’ Climate March in New York last September that mobilized half a million people worldwide, 2015 is becoming a year of mass mobilizations.

After a next stop in September 26/27, we will be in Paris in December for COP-21 where a new climate agreement will be finalized.

We have three possibilities:

The better news is that this is a big opportunity to revive all social movements as a/the real solution to injustice, inequality and poverty. The climate dimension is the “call for the offensive” for all the left.

It is not enough any more to “defend the rights of the people”; we must reclaim, expand and deepen them. And we have to do it now.

Climate science enlightens the path for a sustainable and just future by turning the spotlight to the choice between socialism and barbarism – a choice that will be made in a few decades.

Now the best news is we can have a test-drive here in Portugal as elections approach. Put aside the parties who already identify themselves as the representatives of the ruling class**, we have a very concrete, testable question for those who claim to defend us: What is your master plan for completely transforming the society in 30 years? What is your calendar to reduce greenhouse gas emissions by two thirds in five years?

Or in short: Are you serious about changing the world, or are you a conformist climate denier?

This is the question that in a few years will abruptly re-shape all the political landscape.

* I was told that people would not relate to climate change if I refer to distant lands. It is ironic because Europeans literally do not relate to climate change while the victims are in front of their eyes – especially when some ‘alien’ boats are captured in the Mediterranean for security reasons. So I was talked into referring to the unprecedented sea level rise particularly in Aveiro, heavy rains followed by inundations of the city center in Lisbon, and forest fires that recently raised strong public concern. There you have it…

** The government recently released a “green growth” plan which claims to “decrease” carbon emissions from 68Mt to 68-72Mt in five years?!

One thought on “Climate deniers vs. Climate realists: Conformism is not fashionable anymore. – Sinan Eden”